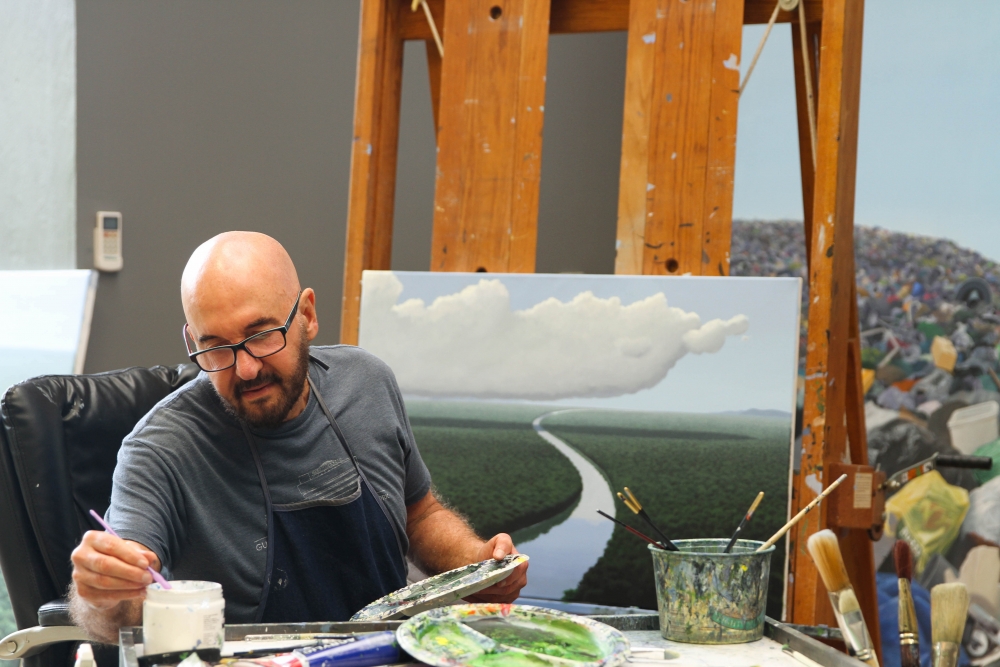 Tomás Sánchez in his studio.

Tomás Sánchez was born in 1948 in central Cuba in the village of Aguada de Pasajeros. A shy youth he would spend long hours exploring the woods around his home and then return and draw what he had seen. In 1964 he studied for two years at the San Alejandro School of Plastic Arts in Havana and later at the aforementioned National School of Art. In 1980 he won the Joan Miró Drawing Prize given by the Miró Foundation in Barcelona and in 1984 he won the Amelia Peláez Award for painting at Havana’s first biennial. In 1985 he had his first retrospective at the National Museum of Fine Arts in Havana. In 1989 he left Cuba to live in Mexico. After spending a few years there, he moved to southern Florida, and in 1995 had his first exhibition in the United States. In 2003 a substantial monograph on the artist was published by Skira with an essay by the South American author, Gabriel García Márquez and text by Edward J. Sullivan. Sánchez currently lives and works in Miami and Costa Rica.

Sánchez infuses his landscape scenes with what the Cuban art critic, Geraldo Mosquera, called “an almost metaphys- ical vision.” This is not surprising considering that Sánchez is ardently devoted to yoga and to meditation which he practices several hours daily. He also goes regularly to a Siddha Yoga retreat in upstate New York. One French critic wrote at the time of the artist’s show in Paris that Sánchez’ work is “a mixture of extreme precision and meditation, of yearning and radiance.” When Sánchez was 20 he attended the National School of Art in Havana where he met the expressionist painter Antonia Eiriz who was a pivotal influence on his development. He says, “she was interested not in how you painted something but in how you saw it.” One might conclude from that statement that while the ostensible subject of Sánchez’ evocative and meticulously painted landscapes is nature, his paintings are in fact expressions of how he views the landscape and in so being they act as states of thought, becoming a kind of con- tained time frame of meditative thinking, transmuting mental quietude and reverence for nature.