The Estate of Juan Genovés

acrylic on canvas mounted on wood

acrylic and resin on canvas munted on board

acrylic on canvas on wood board

acrylic on canvas mounted on wood

acrylic and resin on canvas munted on board

acrylic on canvas on wood board

“In the realm of visual art, each element is not limited to one function alone, rather it has many. For me, the little figures fulfill the missions of realism and humanity, in that they represent how we are all the same, but also different. Visually, they occupy points in space. Any grouping in space that occurs by chance indicates “normalcy” to the eyes of the spectator. But if we add one or more elements to modify it, it immediately becomes “false” for the viewer. For me, that presents a problem. I am learning to modify the “normal”, without what is “false” becoming apparent. I use what is called VP3 in three point perspective: it is the third vanishing point, where the verticals vanish; but I lay traps, in which the illusion is not apparent, and therefore, appears to be real. However, I am certain that these elements have other functions which I have yet to discover. I have always been a collector of “found objects”. They thrill me, and I have thousands, which I use with pleasure.” 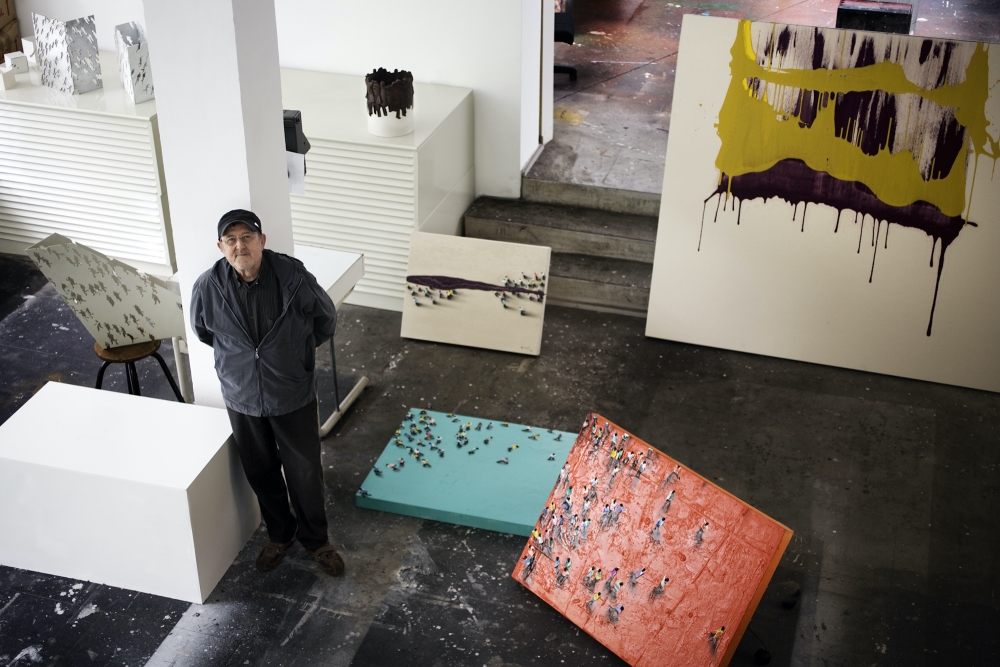 Juan Genovés in his studio.

Born in 1930 in València, Spain, Juan Genovés was a distinct voice who advocated for political change from the dictatorship of Franco, and his works created a stir in a country run under the regime. Among his original artistic influences were the films of Russian director Sergei Eisenstein, who also had an impact on the painter Francis Bacon.

From the 1960s, Genovés explored depictions of crowds withs paintings that presented bird’s-eye views of scenes in which no buildings, roads, trees or clues to a common place are visible, thus creating a landscape of people in motion. As a child in València, Genovés experienced the Spanish Civil War in a traumatic way, and memories of crowds of people running for shelter still distantly inform his work. In his later work, the compositions grew less existential in tone, but still casted a critical eye on the tension that arises in hoards of people.

Genovés created his distinctive figures from thickly applied acrylic paint that protrudes from the surfaces of his canvasses. The lines that reinforce the picture plane can be read as breaks in the image or as topographies encouraging the directional movement of the crowd. The cast shadow is an important element, with each figure being anchored by its unique shadow. In addition, beads and other small objects found by the artist are attached to the figures on the canvas and contribute to the individuality and character of each.