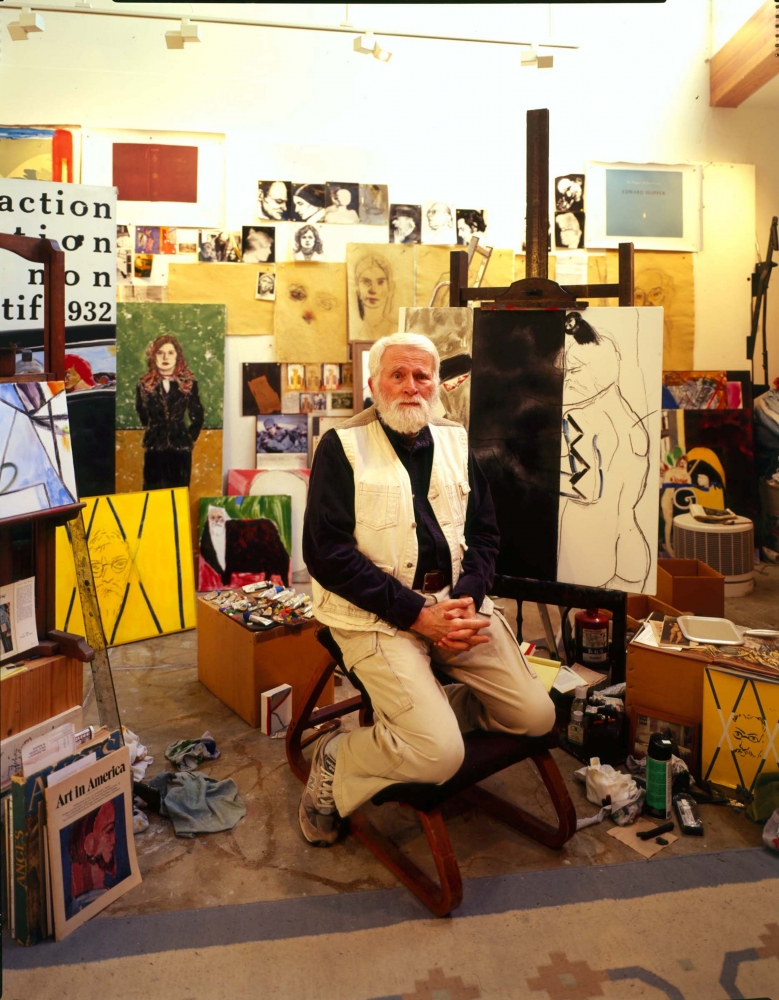 R.B. Kitaj in his studio.

R.B. (Ronald Brooks) Kitaj  was born in 1932 in Cleveland Ohio. One of the most prominent painters of his time, particularly in England where he spent some four decades spanning the late 1950s through the late 1990s, Kitaj is considered a key figure in European and American contemporary painting. While his work has been considered controversial, he is regarded as a master draughtsman with a commitment to figurative art. His highly personal paintings and drawings reflect his deep interest in history; cultural, social and political ideologies; and issues of identity.

Part of an extraordinary cohort who emerged from the Royal College of Art circa 1960, which included Peter Blake, Patrick Caulfield, and David Hockney, Kitaj was immediately pegged as one of its leading figures. The London Times greeted his first solo show in 1963 as a long-awaited and galvanizing event: “Mr. R.B. Kitaj’s first exhibition, now that it has at last taken place, puts the whole ‘new wave’ of figurative painting in this country during the last two or three years into perspective.” In 1976, KItaj curated the exhibition The Human Clay, and in the essay he wrote for it he proposed the existence of a “School of London”—a label which stuck to a group of painters that includes Francis Bacon, Frank Auerbach, Lucian Freud, Leon Kossoff, Michael Andrews, and Kitaj himself. Kitaj “constructed in my head,” as he admitted, hoping that it might “become even more real,” a context in which his willfully contrarian art could make perfect sense. Later, his concept of “diasporism”—an art “enacted under peculiar historical and personal freedoms, stresses, dislocation, rupture and momentum” by one who “lives and paints in two or more societies at once”— gave more specific meaning to the sense of unease that had always been a part of Kitaj’s work.

His various honors include election to the American Academy of Arts and Letters in 1982. In 1985 he became the first American since Sargent to be elected to the Royal Academy. Numerous retrospective exhibitions of his work have been held, including shows at the Hirshhorn Museum, Washington, D.C.; The Tate Gallery, London, United Kingdom; Los Angeles County Museum of Art, Los Angeles, California; and Metropolitan Museum of Art, New York; The Jewish Museum, Berlin, Germany; The Jewish Museum, London, United Kingdom, and the Hamburger Kunsthalle, Hamburg, Germany. In 2001 the National Gallery London organized a solo exhibition of paintings titled, R.B. Kitaj In the Aura of Cezanne and Other Masters.

In 1997, Kitaj left London and moved to Los Angeles, where he spent his days reading, writing, and focusing on his “late style” in his Yellow Studio in Westwood. He died at his home in 2007, one week before his 75th birthday. His death was followed by the publication of the Second Diasporist Manifesto by Yale University Press, and the celebration of his gift of his archive to the UCLA Library Special Collections with exhibitions at the Skirball Cultural Center and UCLA’s Young Research Library.